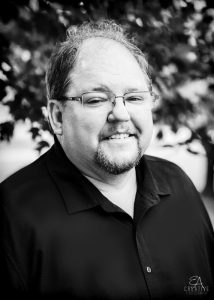 T.J. Akers wants to be a multi-millionaire when he grows up and give his wealth away to help his favorite causes—churches, schools, and animal shelters. Since the millions have been slow in coming, he’s had to settle for working in a state university as a computer technician, volunteering at church and his local animal shelter, and writing stories to entertain people, especially younger readers.

His short story, Necessary Evil, has been published in the science fiction anthology No Revolution Too Big, (Helping Hands Press – April 2014). While his short story Elfanticide, was included in the anthology Tides of Impossibility (Skipjack Press-April 2015).

He has holds a Masters of English from Minnesota State University, Mankato and can often be found roaming that university’s library, especially the children’s and young adult sections. Librarians have always been his heroes.

He lives with his beloved wife of thirty years, his dog, and two cats.