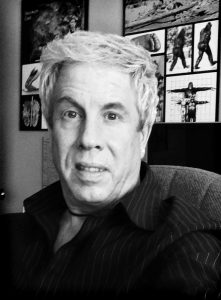 Contact Dusty’s agent, Doug Hijacek, regarding television or radio interviews and any product licensing.  Mr. Hajicek can be contacted at: dhajicek@usinternet.com

Doug Hajicek has known Mark Peterson for over 25 years and has employed Mark in animal tracking using his skilled and highly talented horse Dusty. When Mark asked Doug to help him with his new book release and handle media request and product licensing. He was happy to join Marks promotion team.

Doug Hajicek, President of Whitewolf Entertainment Inc., is a TV series creator, producer, science researcher and inventor. Though the last 30 years Hajicek has produced 6 Worldwide Television series and over 200 TV features since 1987 for networks like History Channel, Discovery Channel, PBS, Speed Channel, Animal Planet and the BBC. Along with these he has produced a number of big budget documentaries for the major cable networks. His work has covered the globe from Russia, the un-explored jungles of Belize and up to the Arctic. He has experienced the diversity and adversity of the business, making him a strong Producer, Director and effective Field Producer. Hajicek knows what’s needed to tell a compelling story, in long or short form. Hajicek is also a skilled Video photographer, and often a Television story writer. Beyond this he is also a seasoned series video editor, having tested and helped with development of an early computer system and then used it as the first non-linear editor for a TV series in 1990 for PBS. Hajicek has been dubbed “The Camera Explorer” by some, inventing and implementing new camera systems in untested places for National TV. Hajicek is also well known for his inventive work as a wildlife researcher and science researcher. Studying and documenting behaviors in black bears, beavers, fish and invertebrates, plus creating innovative forensics for TV. In 2006 one of his greatest accomplishment may have been his development of the Trojan Squid Cam, used to film the world’s first free swimming massive Giant Squid that was over 54 feet long. A true monster.

His other passion is researching natural phenomenon’s, and has been doing so for the last 25 years. In fact Hajicek has to date spent more money on unknown animal research/scientific and field studies than anyone so far, totaling in the millions. The famous 1967 Patterson Film lead him to forensically 3D animate the strange rotating lower leg walk, he dubbed “The Mountain Gait.” Just one of his accomplishments regarding on-going Sasquatch mystery. Recently he developed and built a Laser measuring device that automatically measures the animals it films both above water and below. Used recently to measure and film the first giant Greenland shark in the fresh water St. Lawrence River in Canada, where sharks were thought not to exist and the World’s biggest crocs ever filmed in the wild in India. This lens was also used recently to measure dangerous wild Komodo dragons. Hajicek also developed a shark cam system that can be attached to great white sharks using a unique shark vest system that attaches instantly with a proprietary clasps and is attached without catching the shark. It then releases and floats to the surface at any time or day interval.

Doug Hajicek has been featured on many News stories, Talk shows and National Newspapers such as USA today. He has been a featured TV Show guest on: CNN, FOX, ABC, NBC, CBS, OLN, Animal Planet,The Today Show numerous times and multiple times on The History Channel. He has been a guest on Coast to Coast Am syndicated Radio, Jeff Rense Radio, Man Cow morning show, MPR among many others, including numerous podcasts. He has graced the cover of Video Magazine, has had his shows featured in Entertainment Weekly magazine and recently in a special edition of Newsweek magazine. Les Stroud of Survivorman on Discovery Channel ask him to be his Tech Director for a recent season.

His successful Television career has now spanned more than a quarter century and he continues with innovative hit series like Monster Quest. He currently has many new unique Television projects in development and is a consultant for many current TV shows.

Hajicek has recently invented and applied for a patent on interactive holograms and this high tech invention has currently been incorporated into the AFX holographic theater and many more products are in development. Past inventions total in the Hundreds now and all are in the marketplace in many industries.

Another notable Hajicek creation was the “Benthic Explorer” This complex research vessel was designed and built by Hajicek and was deployed by skilled divers into the icy waters Lake of Superior. It was lowered by The Blue Heron research ship in 2001 and was the World’s first underwater 360 vision camera system that used military multi frequency water piercing lighting systems. It also contained the first visible Sieche meter to measure and document underwater currents and tides caused by the moon. This vessel also had numerous fish intelligence tests to study and document new fish behaviors. The Benthic Explorer also incorporated special microscopic cameras to film and document the many copepod’s living in the clear waters.